I find myself using them on pretty much every platform that has them: matrix, masto, discord, etc.

These would be completely separate from votes, and have no affect on sorting.

What do you think the positives and negatives would be of having them?

I like reactions for group instant messaging, they can provide a snappy (or instant if you will) way to reply or non-textually signal agreement or disagreement.

However for online discussions, I prefer emphasizing active discussion rather than passive engagement. Voting is a good self-moderation feature that filters low-quality interactions and establishes community norms. As for reactions though, I struggle to see how they could contribute to community-building while avoiding a sallow experience that mirrors Facebook. In particular, I’ve seen lackluster Facebook Groups where posts draw many reactions and views but no comments. Anyway, someone wanted to leave a quick “reaction” on Lemmy, they can already do so by leaving a one-sentence comment.

I sympathize with the want to chase social media trends as Lemmy expands, but I don’t see much communal benefit in investing time to build a reactions feature.

If reactions were to be offered anyway, I wish it would be an optional part of the experience. A toggle for users to hide them or for instances to disable them would be appreciated. Reactions won’t make sense for every user, community, or instance.

Based on the feedback here, we’d def add a UI option to hide them.

IMO, it’d be kind of redundant with the upvotes and downvotes, no? Like, you could already react positively or negatively with those.

I’m in favor of them. It’s kind of like Reddit awards but without having to pay for them.

Maybe the community would have a kind of culture around them were 🦃 is like the best emoji you could give a post.

It wouldn’t really make any sense but it works still be part of the culture of this platform.

I do love them, but it’d be hard for them to not get real visually noisy. Also they’d need to be moddable (ex: racists using monkey emojis to harass). Also would they be anonymous the way vote counts are? I think they’re a really fun feature but need careful thought before UI incorporation. (ooh, maybe they’d make sense to keep pretty small and have in a similar position to where Reddit puts comment gilding?)

For the UI, I was thinking they’d look similar to discord reactions, small, grouped, and at the bottom: 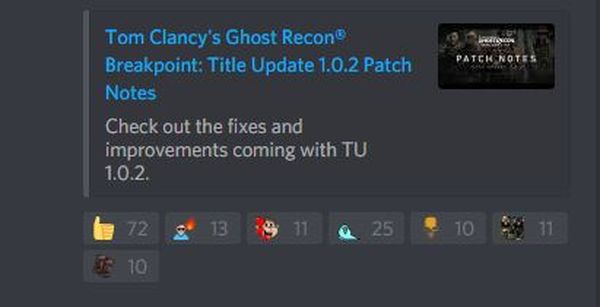 I was originally thinking anonymous, but I never thought of ppl using them for nefarious purposes…

i think i’d be cute. tho i think they’d be more suitable for comments rather than posts

One possible implementation would be coalescing “single-glyph-responses” into a “reaction count” on the ui-layer. so instead of seeing several identical comments like: 👍, its visually more like slack, but on the backend its just a regular comment 🤔

This is one of the most civilized, better argumented and well exposed discussions thata I seen in the internet in a long time.

Been lurking for a while but made an account to comment on this. My primary concern is that being able to see what other people think of something might mean you don’t bother to read it yourself; downvotes have the same effect however their broadness of why a post might deserve one means you need to actually at least skim through something to see if it’s unhelpful, false or badly-worded such that someone could misinterpret it. Downvotes help guide you when you aren’t able to judge the quality of a comment on your own, emoji reactions could tell you how to feel about a comment before you even read it. If you dislike a post more than a downvote can represent, you need to comment on it to explain why it’s bad, forcing you to write out your thoughts - perhaps collect some sources - and most likely proof read them before you comment. An emoji reaction, however, is literally one click away and one scroll later you probably won’t even be able to remember it. A more abstract and slightly paranoid worry about it is that this was used by Facebook to track people, and implementing it in Lemmy could open the door to an instance making modifications and using this for the same thing. I know that Lemmy isn’t Facebook, but that’s precisely why I would rather not have these.

However, I do see a use for these in some communities, namely media-based ones where factual discussion is rare and opinionated (e.g. a community where people post drawings, or links to entertaining YouTube videos), for this reason I think it would perhaps be worth considering as an opt-in for some communities. Because comments typically do not contain media, if you do implement in on an opt-in bases it’s probably worthwhile to allow enabling them for posts and comments independently. Some people may also not like them (UI clutter, prejudice, emojiphobia etc) so you should be able to hide them in user settings.

tl;dr this would make you pre-judge comments and posts, and make people react without explaining their thought process in a reply, however could be nice for some communities as an opt-in

All platforms seem to have them now, except they make theirs paid. Think about it: custom emojis linked to your instance that work cross-instances. And why stop there? Use all emojis from other instances that are federated to yours as well. All free, without limitations, for all users.

Argument 3: reactions can cut down on useless replies. Many forums have had a “thanks” system in place for years before it was popular and I think it helps cut down on “came here to say this” or “+1” replies. Scratches that itch of not being the first one to offer a solution.

So, I was exploring a similar thing when I was talking about making a “debate oriented” instance.

Basically the idea is that responses can be “flaired”, and you could make an empty comment, with that flair as a reaction.

I think it would be awesome to somehow bring both these features to fruition together.

EDIT: bundling this feature with “flair” would also presumably give communities more control over how these features are used (i.e. flair white/black list)