I am @humanetech at Mastodon, #FOSS and #Fediverse advocate, mod at SocialHub, and facilitator of Humane Tech Community.

Thanks for posting @poVoq. ForgeFlux is yet another great development for the Fediverse. The project has joined forces under the forgefriends community umbrella.

Actually tomorrow there’s a webinar on forge federation at 10:00am CET (UTC+1):

Forge federation: How forge friends want to liberate your code

The webinar will be recorded for those who cannot attend.

Fediverse might be Web4 in situations where it makes sense to highlight technological evolutionary iterations of the web. And if you consider Web3 to be the (failed) Semantic Web - where the 3.0 was first introduced - then it makes sense too. The Fediverse is then the Social (Semantic) Web, as it based on Linked Data open standards (ActivityStreams / ActivityPub). But in doing so you also needlessly set yourself up for techno-ideological ‘warfare’ to claim that turf. It can be useful. It can be logical. But I wonder if it is worth the fight.

Web0, introduced by Aral Balkan in reaction to Web3’s ‘blockchain-override’, is also putting emphasis on a technical characteristic. But along a different dimension than evolutionary versioning, namely “web made simple again” and hence for everyone (note: simple != easy).

Peopleverse is yet another dimension: the human aspect. It is a ‘unique selling point’ and almost unclaimed space in the corporate onslaught that the normal web has become. And certainly wrt what the Metaverse aims to be… some cyberpunk corporate-controlled world. No, thank you :)

The most important thing we have on the Fediverse, imho, is our culture. And that culture is determined by everyone’s interaction. I tooted about this this morning in reaction to something I wrote on Fediverse Town:

Be careful what you preach. Those promoting the #Fediverse to the world beyond should be well aware that that the current culture spun up by all fedizens together, are what makes fedi such a worthwhile place to be.

And that this culture is the primary ‘weapon’ in fending off unwanted forces. How we build and integrate our apps is important too, but only in a supportive manner.

Protecting and fostering our culture collaboratively is key to Fediverse’s health and future.

There will be challenges to the Fediverse to overcome in the future, and I feel that for the most part that ‘versioning the web’ will play at best only a minor role in solving them :)

Thank you. No, not really. Atm the community is not as active as it used to be. But I am very active on the fediverse :)

Who campaigns with me along these lines, and helps set ourselves apart from metaverses and other such shallow zuckercrap?..

Yes, I am choosing from a range of hashtags. Some are more appropriate in some contexts. I’ve noticed #PeopleVerse has an appeal to people who never heard of Fediverse, but did hear about Metaverse. I always be sure that Fediverse is mentioned. None of these hashtags are replacements, just additional clarifications.

Sad news indeed. I posted an announcement to SocialHub and involved with migrations of ForgeFed discussions (to SocialHub and Forgefriends) and Fediverse Party website plus the ActivityPub Watchlists (to Codeberg).

link
@humanetech@lemmy.mltoMastodon@lemmy.ml•I don't like that they are called toots in Mastodon
link
1•10d

I use “post” more often since I learned how “toot” is perceived among native English speakers. But if I’m among fedi passionate folks I still use “toot” affectionately (while thinking of small elephants having a bit of fun ;)

Yeah, there’s pros and cons to both approaches. Gitea team is very active and responsive, and I personally like a community approach to a BDFL project. I had some self-hosted Gitea’s, but nowadays I use Codeberg mostly. They are a Gitea instance and actively contributing to the project (one Codeberg member is a core team participant in Gitea). They have added cool features such as Codeberg Pages and soon Codeberg CI (based on Woodpecker CI integration, the FOSS fork of drone.io).

I guess that with Gitea and Forgefriends adding federation support, and this being implemented in Golang, it will be easy for Gogs to adopt that too, and then the choice of code forge wouldn’t matter all that much anymore. Choice would be fully up to personal preference.

Forge federation: How forge friends want to liberate your code   🚀

On 19 January at 10.00 UTC+1 the Forgefriends community is organizing a webinar to introduce anyone that is interested to the importance and benefits of adding federation to code forges such as Gitea, Gitlab, Github and any other forge that implements Fediverse-based interoperability.

Gitea is the first project to be a true “forge friend”. Federation support allows FOSS projects to be liberated from proprietary platforms that lock people in by network effects and FOMO. Forge friends set your code free, and allows anyone to interact with it from their own platform of choice. Just like it works for email, you can choose your own favourite environment, and still interact with a project elsewhere on the web to file issues, merge code and track progress.

There’s an enormous amount of potential that this development unleashes. But whether opportunities are grasped and how fast the “forge friends” vision materializes depends on all of you. The forgefriends community needs your help, whether it is technical in nature or otherwise. Anyone can contribute.

Join the webinar and learn more!

I guess this change in size is due to the fact that the Gitea fork of Gogs has been more actively developed and at this time contains more features than Gogs. Though I haven’t tried Gogs recently to know which they are, I appreciate what Gitea has to offer and I feel with them it becomes more and more attractive for people to consider a move away from Github. With these federation features being added, Gitea will be getting a lot of the same network effects that lead to FOMO and keeps people on Github. But in a decentralized manner.

link
@humanetech@lemmy.mltoFediverse@lemmy.ml•Groups/Communities in Fediverse should work like rooms in [matrix]
link
5•14d

Besides two long-running discussions about standardizing how Groups work, there’s a more recent topic at Social Hub to be able to define Unbound Groups. These are Groups that are not tied to an instance, but are independent of them. With it the same Group can exist on multiple instances. The mechanism we are thinking about is a bit of a workaround to the limitation that Groups are bound to an instance via their Object ID (which is an URL).

Other than that, for a long time I am promoting a concept which I call “Community has no Boundary” (just linking to one comment, but I wrote many). It is about setting the concept of “Community” free of instances once and for all, by defining an Fediverse/ActivityPub extension for it. The “instance” means a server boundary, and that is a technical concept. With the extension we no longer have to talk about instances, but refer to communities instead. Each instance hosts one or more communities, just like Lemmy does.

But it goes a bit further than that. If you look in real life to the groups and communities you are part of, then there are many different types of relationships you have with them. You may be a ‘member of’ a sports club, but also ‘sponsor’ it, and ‘volunteer’ behind the bar in the canteen. That’s three relationships. In fedi apps we see Groups still be limited to ‘member of’ relationship and the additional privilege to be either a moderator or an admin. But it does not go further than that. With Relationship in place for Groups it becomes possible to better express the rich social fabric that exists IRL and build functionality on top of that, which takes that into account.

@lostinlight of Fediverse Party created another splendid Year-In-Review reports about the Fediverse in 2021. …

I added a notification to the website, that it is still WIP 😁
Social Coding hasn’t yet been formally announced, and is not ready for launch.

Your observation is correct. The project is pre ‘official’ announcement and still in preparation, but site is up publicly and that’s why it ended up here prematurely. @csdummi and I started the initiative, after discussing on United Software Development: A new paradigm? in !fediversefutures. You might say the idea was born on Lemmy :)

We have a discussion repo on Codeberg, but found a place on the forgefriends community. The website will be changed to position what Social Coding is and does more clearly and to enable the “Social Coding Movement” as our initiative will be called, to be crowdsourced, incremental and extensible. See: Positioning Social Coding and Forgefriends. We have a Social Coding charemovedm on Matrix. 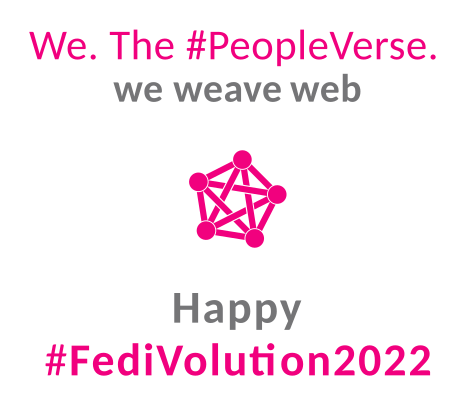 The question is whether the project should be forked into multiple separate projects at all. An alternative would be to have a generic “Directory Platform” and have modules to make it a Book Review platform, a Movie Database, or whatever-you-wanna-collect platform with another module. The modules would mostly be templates and data structures + user interface widgets to present them nicely.

For more Wordpress-related ActivityPub projects and other plugins, check the the ActivityPub Developer Resources Watchlist (I am a co-maintainer, ping me if you know about additional stuff to add).

I have added a section to the original post, presenting the concept of the Web of Agency.

Yes, I really like it too. Just today I found out that they also support Issue and PR templates, which I need for porting stuff.

Yes, you are quite right. With all the tools and features that MS Github brings together there will be more and more network effects and FOMO for devs to stick to their platform. There’ll be implicit vendor lock-in. Microsoft increasingly uses the open source ecosystem (that tbh they did great service to in the past) to bind developers to their entire portfolio of other services. I expect in future, as their dominance growse even further, that they’ll start to monetize more and more stuff. Then it will be harder still for projects deeply embedded on their platform to move somewhere else. And at the same time for people new to open-source it is really hard to get an overview of the free software movement. That ‘somewhere else’ seems to be all github-based.

Found this news via Michael Downey’s toot (admin of FLOSS.social: …

I just created this on Fediverse Town, inspired by Alja’s toot and Houkime’s Fedijams. In my own toot just now, I added: …

I am on mobile and no good way to check, but it seems that mastodon.social has been down idk for the past couple of hours or so…

I am on mobile and no good way to check, but it seems that mastodon.social has been down idk for the past couple of hours or so…