it’s not a new concept though. it is the way the internet was designed and everything used to work up until the point corporations managed to hijack the ecosystem so they could harvest data and make billions. the open and federated part of the internet is still here (IRC is still alive and well, for example, and open source is still a thing), the vast majority of people just don’t know about it because they weren’t around pre-corporate era, and all they know is what corporations tell them through anti-competitive moves stifle competition and isolate users.

i hope we will reclaim the internet one day, but governments don’t seem to care about keeping up to date with corporate abuse laws. i mean, point me towards one government that isn’t using Windows, for example; and the fact that nearly all governments depend on Windows is both unethical and in many cases illegal, since the tax money paid for infrastructure and IT development should ‘go back’ to the local population, not paid to a foreign corporation, especially not for decades, due to legacy issues.

link
@sibachian@lemmy.mltoasklemmy@lemmy.ml•nutomic said it was OK to post opinions that are not pro vax
link
8•4d

spreading misinformation is obnoxious, and you defending such behavior is no better.

appropriately, antivaxxers won’t live long enough to be a permanent nuisance for society.

they would if they could. which is my point. without a replacement OS in the pipes, apple would be shooting themselves by demonizing open source software in front of the government.

considering Darwin (unix/BSD) is open source and what MacOS, iOS, watchOS, tvOS, iPadOS and bridgeOS runs on (and by law, they can’t close that source code), I can’t see Apple arguing in favor of closed source software. Assuming they don’t have an entirely new inhouse OS in the pipelines that they’re planning to replace Darwin with.

Ha! Good thing I just quit my day job as an SEO specialist. An entire industry based on googles whims and secret algo is incredibly fragile anyway. It’s insane how dependent nearly all business is on google. I hope they ban more of their tracking stuff!

link
@sibachian@lemmy.mltoFirefox@lemmy.ml•Mozilla is pausing cryptocurrency donations and reviewing it in relation to its climate policy
link
-1•12d

btc is not the only crypto, yet always the one used as an example for anti-crypto propaganda. and even if it was the only crypto, crypto overall use less electricity than conventional banking.

half the point of crypto is to not use the government/privately controlled banking system. anti-crypto activists getting mad at the wrong people and supporting the rich, because they were told to; by media, owned by the rich. awesome.

people up in arms over things they don’t understand is why the world is shit.

signal is centralized, requires your phone number, hosted in the US, has very limited interface and features, and run by a steve jobs type personality. thanks, but no thanks.

i haven’t had this issue in over a year except for when using clients other than element.

i’ve had a lot of issues with getting nheko to sync for some reason. suddenly it just desyncs and all messages are encrypted. or it doesn’t sync at all and i only get messages on element on the phone. but yes, we should all collectively be against electron; it just gives google/chrome another platform to dominate - which is especially important to be now that they’re disabling adblockers.

not everyone has the time or technical for running and operating their own infrastructure. it’s why most people stick to lemmy.ml, matrix.org, etc.

mumble (which displaced ventrilo/teamspeak as the previous dominant gaming chat clients) was already displaced by curse voice, which then got displaced by discord.

discord was selling itself as “the good guys” who would never do something scummy, and targetted the market as a slack for gamers, and right before launch, they sold out. but it was already “too big” to get people to change client. and now it’s growing even more because people are looking at it as an alternative platform to facebook groups - now that facebook is fucking up groups.

agreed. i’ve been stuck with discord for years because i don’t really keep in touch with a lot of people and the three main people i keep in touch with uses discord exclusively (one is a developer and uses it within those circles, the other is a gamer and uses it within those circles, the third is an aquarist and uses it within those circles). i’ve argued so many times that we should move to matrix, but they insist that the community structure of discord is superior to anything on the market. @Ninmi@sopuli.xyz has a valid point that it has a good structure for plain communication, but that doesn’t mean it’s a good community platform for exchange of information; which is your point and i wholly agree. for the purpose of exchange of information, “guilded”, a discord clone, is superior as it actually has multiple information exchange features such as an actual forum on top of discords features. unfortunately it is also not FOSS and it is my personal reason for choosing matrix over it, despite matrix not having the features either discord or guilded does. it is frankly infuriating that something like guilded can pop out from nowhere with a small team and do what matrix has failed to deliver for years.

element (like discord) is using an electron wrapper, which is awful and there is no way around it. what we need is a real client. nheko is far behind in features, so if anything, we need more people involved in improving that client.

link
@sibachian@lemmy.mltoasklemmy@lemmy.ml•What are your thoughts on Tiktok?
link
1•21d

sure, people always waste their time, but it used to be actual social interactions, which are actually helpful and constructive. the difference is that modern social media is designed and adjusted for maximized eyeball metrics. if you specifically design and develop an app to make the user more and more addicted to it, so you can profit from advertisement, it is your fault. considering everything else it does to you, such as impacted self-esteem, algorithmic exposure to controversial material, and trained quick gratification-seeking. it’s pretty damaging for society as a whole.

link
@sibachian@lemmy.mltoasklemmy@lemmy.ml•how did you lose weight as an adult?
link
1•25d

yes, a lot of food focused papers are published without proper test groups or done on animals - which doesn’t translate well to humans. nutritionists aren’t usually scientists though and as you said they usually reference trial studies for their job, and a lot of those studies are sponsored by big corporations with an agenda. it’s also important to understand that not everyone metabolizes nutrition at the same rates (sometimes not at all). what work for some, may not work for others, which is why using someone who looks fit as a goal and reference might not actually work for most people. there are just too many factors at play. anyway, for a proper clue the field of interest is molecular biology. which is rather new in its application for diet and nutrition.

link
@sibachian@lemmy.mltoasklemmy@lemmy.ml•how did you lose weight as an adult?
link
1•
edit-2
25d

link
@sibachian@lemmy.mltoPrivacy@lemmy.ml•Disconnect between critiques of Telegram and its practical use
link
8•1M

how is that a problem with matrix? it has minimal metadata, encrypted, and don’t require any form of identification to use.

sure mostly everyone use the matrix.org instance, but that’s a problem of most federated services. we’re all here on lemmy.ml, while we could be elsewhere. but that’s also the whole point of a federated service. you could host it yourself. if your threat level required it.

sure, could be argued that XMPP is a better option than matrix. it’s old. relatively stable. and still somewhat familiar and popular throughout all these years. but that comes at the cost of no modern clients. no modern features. and opposite to matrix, no central hub/gateway or client for casual users to adopt a core service and participate through - which is pretty important if you actually plan to use a social medium.

by equal value i did not mean equality. i think it’s important to make the distinction between equality and equity.

edit; i love this meme: 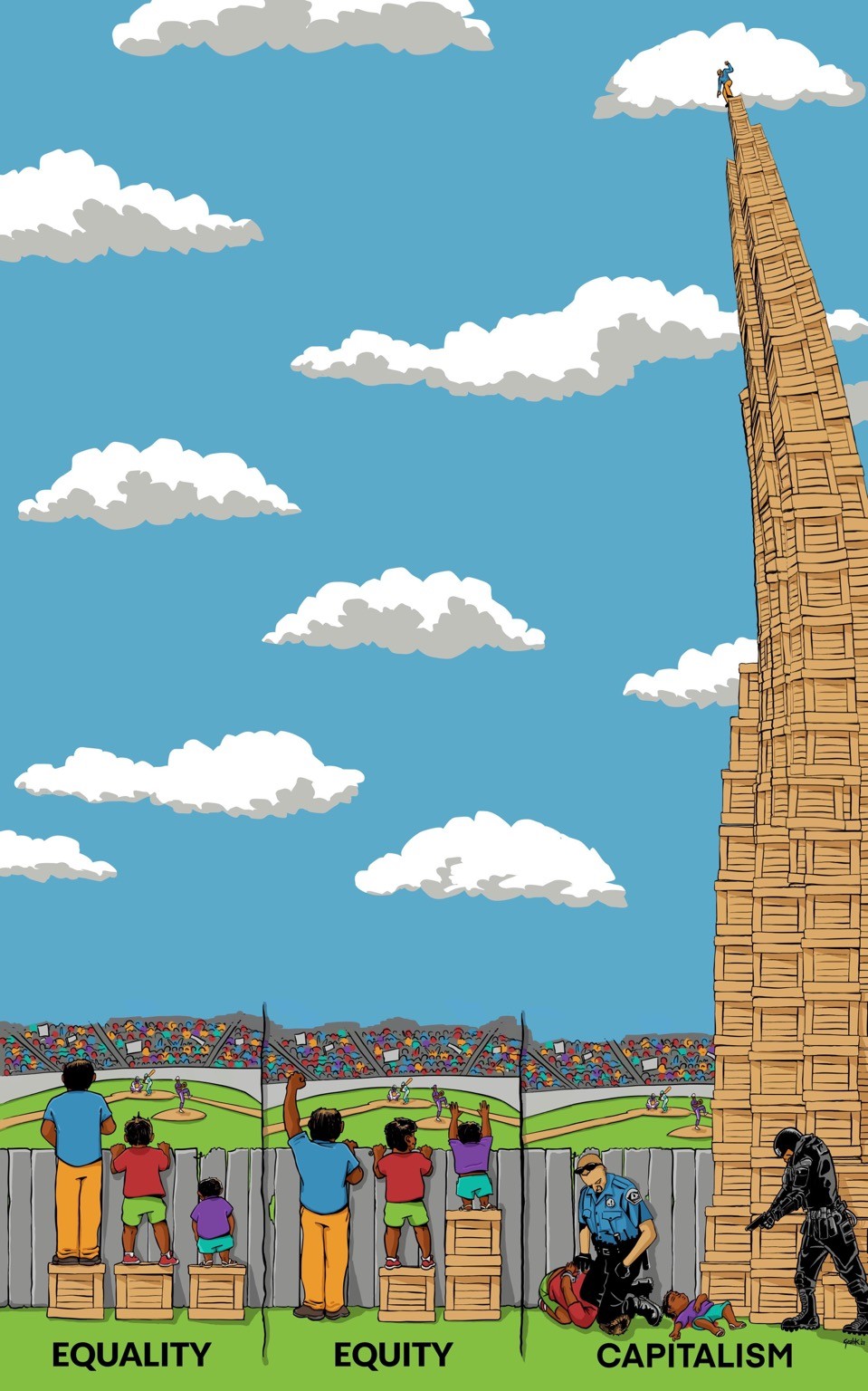 the way i see it, you could just break it down to a simple state where you either think all people are of equal value, or you think only a handful few are of equal value. which makes it pretty one-dimensional. left vs right. all the layers in-between are dramatized excuses and rationalizations of either position.

could fediverse be installed on an RPi4?

i’ve got an RPi4 not doing much legwork atm. is there an easy way to install and host lemmy on it? if not, maybe a mastodon instance?..

could fediverse be installed on an RPi4?